Advertisements
With active warfare on multiple fronts, technology plays a greater role today in military warfare around the globe than ever before. Video game publisher and developer Ubisoft has worked closely with the companies that provide the United States military with the latest gadgets, weapons and innovations to help ensure the safety of Special Forces soldiers  in combat. 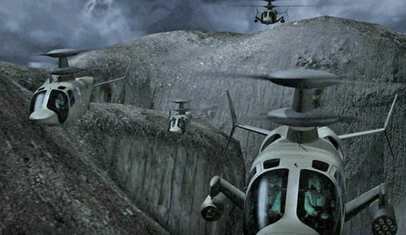 “Our goals for this game are to allow the player to escape into the world of Special Forces,” says White. “We really want the players to feel like they are in an elite group of soldiers and that they can take on the world.”

The gameplay has been designed so players can take on this world both by themselves and with friends, explains White. “Co-op gaming is such a huge opportunity for us; experiencing something by yourself is great, but when you can experience something with your friends, it can be so much better,” he says. “We also want to remind gamers that the Ghosts have not gone anywhere. They are here — and more badass than ever.”

The team behind Future Soldier promises that this latest game will bring something fresh to the shooter genre, including optical camouflage, personal combat drones and a new exoskeleton that enables more athletic combat maneuvers behind enemy lines. At the same time, they are following the formula that Tom Clancy  has made famous.

“We look at what is going on today in modern combat and then make some assumptions about what the near future could look like,” says White. “The trick is to put yourself just far enough into the future that your storyline is not controversial.”

Ghost Recon: Future Soldier is set in 2025, giving gamers the chance to experience the future of warfare — today.