What Lies Beneath the Sea: Shooting in Stereo 3D

Scott Cassell and Dave Faires are on a mission. Cassell is a wildlife filmmaker and underwater explorer. Faires is his director of photography. Together, they’re out to help marine researchers, educators, students and “citizen scientists” discover and safeguard what lies beneath the ocean. As Cassell puts it: “People are motivated to preserve and protect the things they understand and appreciate.”

To accomplish this, the duo has been documenting Cassell’s underwater adventures using cutting-edge digital video technology. So when Cassell attempted to break a world record by swimming underwater from Catalina Island to the California coast — a dive of 30 miles — they assembled a support crew and armed them with an array of 2D and S3D video cameras, which included Sony XDCAMs, Sony HXR-NX3D1Us, Panasonic AG-3DA1s, a Panasonic HDC-Z10000 and multiple GoPro 3D Hero rigs. In addition, they used Canon EOS 7D Digital SLRs to shoot both 2D still pictures and HD video. Their documentary, 30-Mile-Dive, is currently in production.

“We decided to complement traditional 2D video with stereoscopic 3D (S3D) footage because it has such a powerful effect on audiences,” says Faires. “We had cameras everywhere you looked. A Sony XDCAM caught the action above water from the deck of our boat. On the tow sled, we had 2D and S3D cameras covering Scott. The support divers used helmet cams.”

Underwater Shooting in S3D: The Challenges 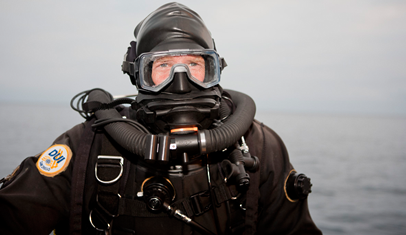 files for digital projection in theaters with RealD S3D technology. “Our goal has always been to produce, shoot, edit and finish 30-Mile-Dive in 2D and S3D for broadcast and theatrical release using cameras and lenses characteristically not designed for the cinema,” says Faires.

“We feel we have a compelling documentary on the declining state of the ocean and how we need to pay attention to her,” he adds. “If her health goes away, so do we.”